How to Install and Use Nmap Network Scanner on Linux

Nmap can also audit the security of a device, identify the vulnerabilities of your network, or perform an inventory check with relative ease.

This tutorial shows how to install Nmap on Linux and explains Nmap’s most important features. 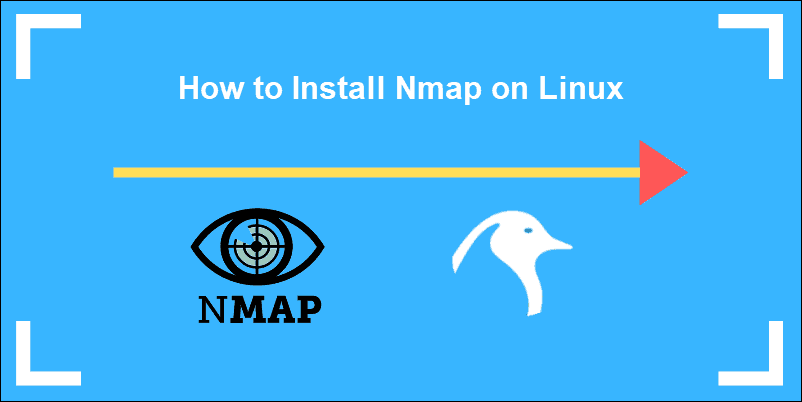 The installation process of NMAP is simple and straightforward, requiring only a single command.

How to Install Nmap on Debian / Ubuntu

1. Install Nmap on Ubuntu by entering the following command:

2. The system prompts you to confirm the installation by typing y.

3. After the installation is finished, verify the installed version of Nmap by entering:

How to Install Nmap on CentOS / RHEL

1. To install Nmap on an RHEL based Linux distribution type the following command:

This is an example of the output in CentOS 7.

2. Confirm the installation by typing y.

3. Like in other Linux distributions, once the installation is completed, check the version of Nmap by entering:

In this example, the installed version for CentOS 7 is 6.40.

How to use NMAP Security Scanner on Linux

Once you complete the installation process, Nmap commands are identical regardless of the Linux distribution. Nmap provides a list of scanned targets along with supplemental information, based on the options and arguments used.

The article covers the basic options this tool has to offer. For a full list of options visit the Nmap official page or access the manual from your command line:

Note: It is important to emphasize that aggressive port scanning to find open ports without permission can be interpreted as malicious by third-party organizations.

To obtain general information of a remote system type:

Instead of scanning individual IPs, scan a whole IP range by defining it in your command line:

By default, Nmap scans the thousand most common ports for each protocol. It also offers options for specifying which ports are to be scanned, and whether the scan is random or ordered.

The -p option allows you to specify port ranges and sequences:

This command scans ports 80 and 443 for the defined host.

Initiate TCP SYN for a fast and unobtrusive scan. Since this type of scan never completes TCP connections, it is often referred to as half-open scanning.

To run a TCP SYN scan, use the command:

Scanning a large number of hosts is a time-consuming process. Nmap has an option to define the speed and thoroughness of the scan. Understandably, scans that need to avoid IDS alerts are slower.

Scan speeds designations start at T0 and span to T5. The higher the speed of the scan the more aggressive it is deemed.

The results of sophisticated tests and algorithms need to be presented in an understandable and structured manner to be useful. The –v command increases verbosity and forces Nmap to print more information about the scan in progress.

Open ports are shown in real-time and completion time estimates are provided.

The -A option enables a comprehensive set of scan options. It enables:

Since Nmap accepts multiple host specifications on the command line, they do not need to be of the same type.

We can combine the options listed to detect the OS and version, script scanning, and traceroute. We can also use –A and –T4 for faster execution. Additionally, the –Pn option to tell the Nmap tool not to initiate a ping scan:

The output compiles and presents the information from the scan we requested. 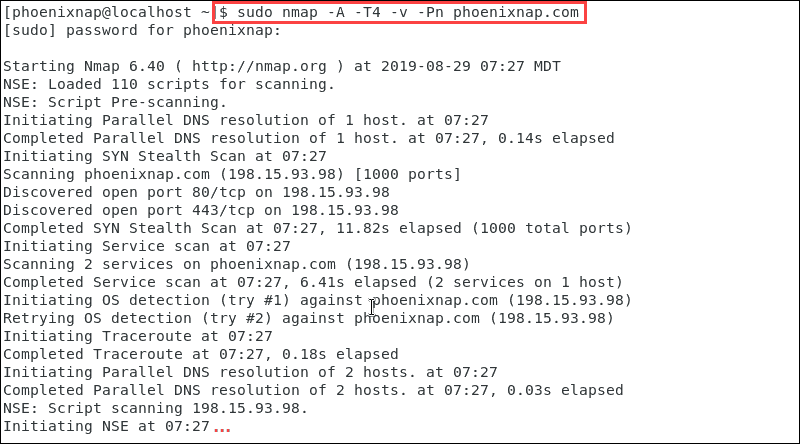 Now you know how to install and use Nmap on your Linux system. Nmap has many available options and can be a powerful and versatile scanning tool to discover network vulnerabilities.

Learn 17 more Nmap Commands with examples in this article!

Vladimir Kaplarevic
Vladimir is a resident Tech Writer at phoenixNAP. He has more than 7 years of experience in implementing e-commerce and online payment solutions with various global IT services providers. His articles aim to instill a passion for innovative technologies in others by providing practical advice and using an engaging writing style.
Next you should read
Networking Security SysAdmin
How to Install NMAP on Ubuntu 18.04
This article will help you how to install Nmap on Ubuntu 18.04 as well as explore some of the options it has...
Read more
Bare Metal Servers Security
21 Server Security Tips to Secure Your Server
Hackers are always on the lookout for server vulnerabilities. Minimize risks and be confident your data is...
Read more
Security Web Servers
How to Set up & Configure ModSecurity on Apache
ModSecurity is an Open-source firewall application for Apache. Learn how to Setup & Configure ModSecurity on...
Read more
Networking Security
How to Scan & Find All Open Ports with Nmap
The Nmap hosted security tool can help you determine how well your firewall and security configuration is...
Read more
© 2021 Copyright phoenixNAP | Global IT Services. All Rights Reserved.