How To Use grep Command In Linux/UNIX

Home » SysAdmin » How To Use grep Command In Linux/UNIX

This guide details the most useful grep commands for Linux / Unix systems.

After going through all the commands and examples, you will learn how to use grep to search files for a text from the terminal. 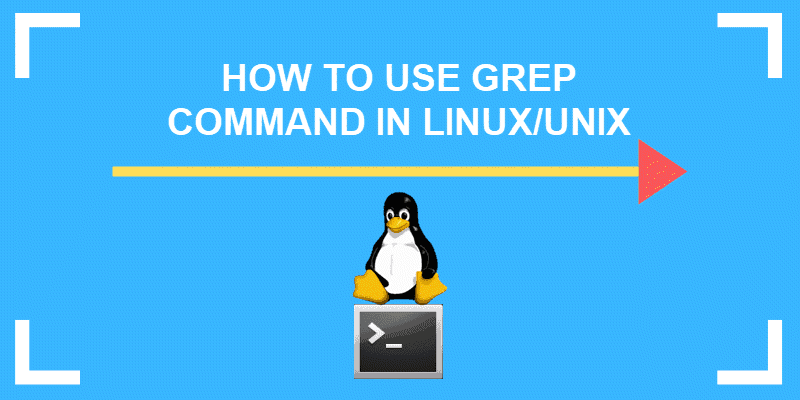 Note: A line does not represent a line of text as viewed on the terminal screen. A line in a text file is a sequence of characters until a line break is introduced. The output of grep commands may contain whole paragraphs unless the search options are refined.

What is the grep Command?

Grep is an acronym that stands for Global Regular Expression Print.

Grep is a Linux / Unix command-line tool used to search for a string of characters in a specified file. The text search pattern is called a regular expression. When it finds a match, it prints the line with the result. The grep command is handy when searching through large log files.

The grep command consists of three parts in its most basic form. The first part starts with grep, followed by the pattern that you are searching for. After the string comes the file name that the grep searches through.

The command can contain many options, pattern variations, and file names. Combine as many options as necessary to get the results you need. Below are the most common grep commands with examples.

Note: Grep is case-sensitive. Make sure to use the correct case when running grep commands.

To Search a File

To print any line from a file that contains a specific pattern of characters, in our case phoenix in the file sample2, run the command:

Grep will display every line where there is a match for the word phoenix. When executing this command, you do not get exact matches. Instead, the terminal prints the lines with words containing the string of characters you entered. Here is an example:

Tip: If your search pattern includes characters other than alphanumeric, use quotation marks. This includes blank spaces or any symbol.

To search multiple files with the grep command, insert the filenames you want to search, separated with a space character.

In our case, the grep command to match the word phoenix in three files sample,sample2, and sample3 looks like this example:

The terminal prints the name of every file that contains the matching lines, and the actual lines that include the required string of characters.

You can append as many filenames as needed. The terminal prints a new line with the filename for every match it finds in the listed files.

Tip: Refer to our article Xargs Commands to learn how to use xargs with grep to search for a string in the list of files.

Search All Files in Directory

To search all files in the current directory, use an asterisk instead of a filename at the end of a grep command.

In this example, we use nix as a search criterion:

The output shows the name of the file with nix and returns the entire line.

To Find Whole Words Only

Grep allows you to find and print the results for whole words only. To search for the word phoenix in all files in the current directory, append –w to the grep command.

This option only prints the lines with whole-word matches and the names of the files it found them in:

When –w is omitted, grep displays the search pattern even if it is a substring of another word.

To Ignore Case in Grep Searches

As grep commands are case sensitive, one of the most useful operators for grep searches is -i. Instead of printing lowercase results only, the terminal displays both uppercase and lowercase results. The output includes lines with mixed case entries.

An example of this command:

If we use the -i operator to search files in the current directory for phoenix, the output looks like this:

To include all subdirectories in a search, add the -r operator to the grep command.

This command prints the matches for all files in the current directory, subdirectories, and the exact path with the filename. In the example below, we also added the -w operator to show whole words, but the output form is the same.

You can use grep to print all lines that do not match a specific pattern of characters. To invert the search, append -v to a grep command.

To exclude all lines that contain phoenix, enter:

The terminal prints all lines that do not contain the word used as a search criterion. Use -i to ignore case to exclude completely the word used for this search:

To Show Lines That Exactly Match a Search String

The grep command prints entire lines when it finds a match in a file. To print only those lines that completely match the search string, add the -x option.

The output shows only the lines with the exact match. If there are any other words or characters in the same line, the grep does not include it in the search results. Do not forget to use quotation marks whenever there is a space or a symbol in a search pattern.

Here is a comparison of the results without and with the -x operator in our grep command:

Sometimes, you only need to see the names of the files that contain a word or string of characters and exclude the actual lines. To print only the filenames that match your search, use the -l operator:

The output shows the exact filenames that contain phoenix in the current directory but does not print the lines with the corresponding word:

As a reminder, use the recursive search operator -r to include all subdirectories in your search.

To Count the Number of Matches

Grep can display the filenames and the count of lines where it finds a match for your word.

Use the -c operator to count the number of matches:

Sometimes you need more content in search results to decide what is most relevant.

Use the following operators to add the desired lines before, after a match, or both:

We will search for Phoenix in the current directory, show two lines before and after the matches along with their line numbers.

Limit grep Output to a Fixed Number of Lines

Individual files, such as log files, can contain many matches for grep search patterns. Limit the number of lines in the grep output by adding the -m option and a number to the command.

In this case, the terminal prints the first two matches it finds in the sample file.

If you do not specify a file and search all files in a directory, the output prints the first two results from every file along with the filename that contains the matches.

Now you know how to use the grep command in Linux/Unix.

The grep command is highly flexible with many useful operators and options. By combining grep commands, you can get powerful results and find the text hiding in thousands of files.

Goran Jevtic
Goran combines his passions for research, writing and technology as a technical writer at phoenixNAP. Working with multiple departments and on a variety of projects, he has developed extraordinary understanding of cloud and virtualization technology trends and best practices.
Next you should read
SysAdmin Web Servers
How to List, Display, & View all Current Cron Jobs in Linux
Cron is used to schedule scripts and commands on Linux systems. Find out where these jobs are stored and list...
Read more
SysAdmin Web Servers
How to List Users in Linux, List all Users Command
Linux OS is unique because of its multiuser characteristic. It allows multiple users on one system, at the...
Read more
SysAdmin
How to Use mkdir Command to Make or Create a Linux Directory
The mkdir command in Linux allows users to create or make new directories. mkdir stands for make directory...
Read more
SysAdmin
Linux SCP Command: Securely Copy & Transfer Files
Tutorial on securely transferring files between Unix or Linux systems using the SCP command. The SCP or ...
Read more
© 2021 Copyright phoenixNAP | Global IT Services. All Rights Reserved.