Home » DevOps and Development » How To Install Ruby on Ubuntu 18.04

Ruby is a dynamic, open-source programming language behind the Ruby on Rails framework. It is especially appealing to beginners because of its highly readable and clear syntax, allowing users to develop fast and efficiently.

In this guide, find three options to install Ruby on Ubuntu 18.04 – either from the Ubuntu repository or from third-party tools (RVM and rbenv). 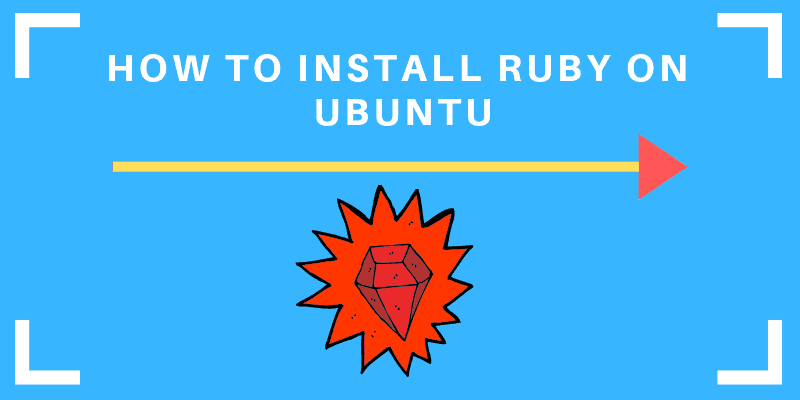 To install Ruby from the default Ubuntu repositories, follow these steps:

1. Open the terminal either by using Ctrl+Alt+T keyboard shortcut. Or,  by running a search in Ubuntu Dash and typing in the word “terminal“ and selecting the Terminal Icon as seen in the image below.

2. Make sure to update the package repository cache to ensure you install the latest versions of the software.

To do so, type in the following command:

3. Start the Ruby installation process by running the command:

Press y and hit Enter to verify the installation.

4. To check whether the installation was successful, type in the command:

The output you receive will show you which version of Ruby you have installed, just like in the image below: 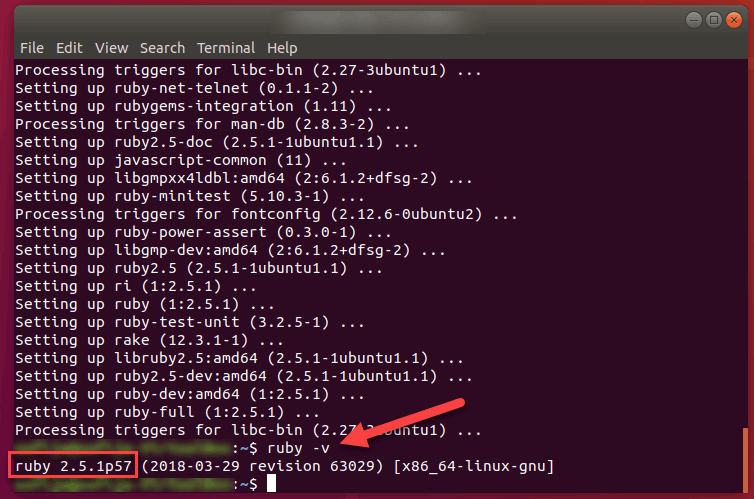 Ruby Version Manager (RVM) is a command-line tool which allows you to easily install, manage and work with Ruby versions and their gems.

To enable RVM, you will have to install the GPG keys to verify the installation package.

1. Start by running the command:

1. Before installing RVM, you will need to install software prerequisites with the command:

2. Next, you will add the PPA repository for Ubuntu and finally install RVM.

3. At this point, it is recommended to restart your system.

Now that you have set up the RVM command-line, you can install Ruby by typing the following command:

Make sure the installation was successful by checking the version of Ruby you have installed with the command:

Note: If you are running a Windows server, you can refer to How to Install Ruby on Windows 10.

Simple Ruby Version Management (rbenv) is a third-party command tool designed for easier alternation between various Ruby versions. It is specific to switching Ruby versions, making it simple and predictable.

1. Copy the command below to install the packages and dependencies required to build Ruby:

2. To install rbenv and ruby-build, type in the command:

3. Next, you need to add rbenv to your path with the following three (3) commands:

4. After you have installed rbenv, you can install the latest version of Ruby. Run the command:

5. Make sure the installation was successful by checking the version of Ruby you have installed:

To install, manage and distribute your Ruby libraries (also called gems) you will need the RubyGems package manager.

Each gem contains a Ruby code which you can share with other users. Primarily, these gems serve as libraries from which you can easily install any package required.

The RubyGems management framework is part of Ruby which is why you don’t have to install it separately.

However, you may need to update to the latest version with the command:

By following one of the three methods above, you will successfully install Ruby on Ubuntu 18.04.

Next, you may want to install a full Ruby on Rails stack. This is one of the most popular application-development stacks in use. Rails is a development framework for the Ruby programming language that simplifies and speeds up app development.

Sofija Simic
Sofija Simic is an aspiring Technical Writer at phoenixNAP. Alongside her educational background in teaching and writing, she has had a lifelong passion for information technology. She is committed to unscrambling confusing IT concepts and streamlining intricate software installations.
Next you should read
DevOps and Development
How to Install Ruby on Windows 10
Ruby is often used in web applications, games, and simple scripts. Follow this simple tutorial and install...
Read more
MySQL SysAdmin
Install and Get Started with MySQL Workbench on Ubuntu 18.04
Workbench is a visual tool for managing MySQL databases . Its graphical interface allows administrators and...
Read more
MySQL
How to Install MySQL 8.0 in Ubuntu 18.04
MySQL is an open-source relational database server tool for Linux operating systems. It is widely used in...
Read more
SysAdmin Web Servers
How to Update Linux Kernel In Ubuntu
The Linux kernel is like the central core of the operating system.Â  It works as sort of a mediator, providing...
Read more
© 2021 Copyright phoenixNAP | Global IT Services. All Rights Reserved.