How to Install and Use TensorFlow on CentOS 7

Home » SysAdmin » How to Install and Use TensorFlow on CentOS 7

In this tutorial, learn how to install TensorFlow on CentOS 7. 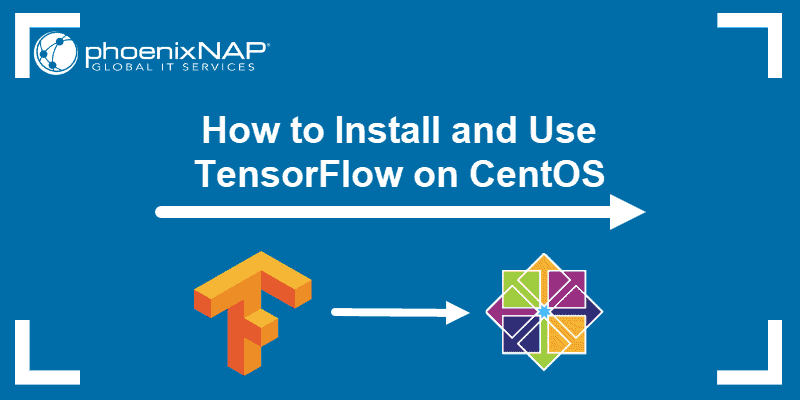 To download the required packages and dependencies, you’ll first need to install and update the EPEL repository. Use the following two commands:

Although TensorFlow supports multiple languages, Python is the one that provides the most features.

If you do not have Python installed on CentOS, run the following command to install pip (a package management system for Python) and the language itself:

The output shows that the system downloaded dependencies.

Next, create an environment variable that points to the download URL for TensorFlow. Doing so isolates the package installation from the CentOS system.

Use the following command to install and upgrade Virtualenv on CentOS:

Warning: The next step requires access to the root environment and home directory. Changing to the root shell is required. Run the following command to switch to it: sudo su -. Type in the password for the root user and press Enter.

Create a new environment by typing:

After setting up and activating the virtual environment, you can finally move on to installing the TensorFlow library. There are two available software packages, TensorFlow for CPU and TensorFlow for GPU.

To install TensorFlow for CPU version 1.14 or older, run the command in the following format:

For example, to install TensorFlow for CPU version 1.14, type:

To install TensorFlow for GPU version 1.14, type the command in the following format:

TensorFlow 1.15 supports both CPU and GPU workloads in a single package. To install the 1.15 release, run the following command:

With the help of this guide, you have successfully installed TensorFlow on a CentOS 7 system. You can also create virtual environments, check versions of TensorFlow, and can verify the installation.

If you have a system running Ubuntu 18.04, our TensorFlow installation for Ubuntu can help.

Sofija Simic
Sofija Simic is an aspiring Technical Writer at phoenixNAP. Alongside her educational background in teaching and writing, she has had a lifelong passion for information technology. She is committed to unscrambling confusing IT concepts and streamlining intricate software installations.
Next you should read
DevOps and Development SysAdmin
How to Install Keras With TensorFlow Backend on Linux
Follow the step by step instructions to learn how to prepare your system for the installation of Keras and...
Read more
Bare Metal Servers DevOps and Development
How to Install TensorFlow GPU on Ubuntu 18.04
Designed to simplify the process of implementing machine-learning models, TensorFlow is Google's open-source...
Read more
Bare Metal Servers Virtualization
What is Server Virtualization? Definition and How it Works
A virtualized server allows one piece of hardware to be used as multiple virtual servers. Learn about Server...
Read more
Bare Metal Servers SysAdmin
How to Install NVIDIA Tesla Drivers on Linux or Windows
Growing demands for extreme compute power lead to the unavoidable presence of bare metal servers in today's...
Read more
© 2021 Copyright phoenixNAP | Global IT Services. All Rights Reserved.