CentOS 8 was finally released on September 24th, 2019. As this is a Linux distribution derived from Red Hat Enterprise Linux (RHEL), the CentOS team had to build an infrastructure to support the newly introduced RHEL 8. Also, don’t forget the fact that CentOS 6 reaches its end of life in November 2020.

NOTE: The CentOS 8 life cycle has been cut short with the news of its EOL in December 2021. RHEL revealed it would be shifting focus from CentOS Linux to CentOS Stream. Find out more in our article about CentOS 8 EOL.

CentOS is widely used among developers and system administrators as it offers full control over its highly customizable open-source software packages. It is stable and has a large and active support community behind it. Due to its reliability, it has become a popular choice among operating systems for servers.

Let’s take a look at all the new features and updates CentOS 8 has to offer. 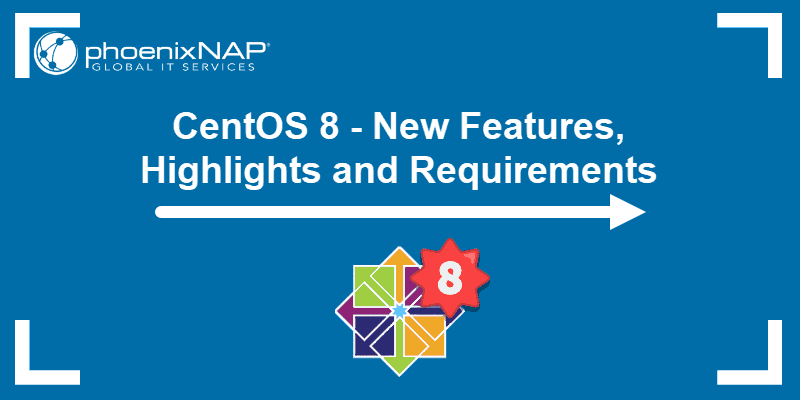 To download CentOS 8 and try it out for yourself you can navigate to the official CentOS Download webpage.

There you will find the CentOS Linux DVD ISO as well as the CentOS Stream DVD ISO. We have created a full tutorial on how to install CentOS 8.

Unlike previous CentOS versions where the default installation did not include a GUI, the CentOS 8 default desktop environment is GNOME 3.28. What’s more, the GNOME Display Manager now uses Wayland as the default display server (as opposed to the X.org server).

The newest GNOME (nicknamed Chongqing) includes a number of useful features including:

As far as networking features, there are two major updates:

Most of all, these changes ensure better stability, scaling, and performance.

nftables replaces iptables, iptablesip6table, arptables, and ebtables, serving as a single framework for IPv4 and IPv6 protocols. In addition, the firewalld deamon will also use the same subsystem for filtering network transactions as its default backend.

The open web-based interface, Cockpit, now comes as part of the new CentOS release. Use this platform to easily manage your servers through a web console interface. Perform system tasks, create and manage virtual machines, configure networks, start containers, and inspect logs all via web browser.

Cockpit is highly integrated. Not only does it have an embedded terminal allowing you to switch from terminal to browser at any time, but it also works on mobile devices.

Therefore, when you install CentOS 8 it will automatically set up the Cockpit web console, along with opening the required firewall ports. However, you do not worry about it burdening the system. The software is quite efficient as it uses memory and CPU only when active.

While BaseOS includes all the underlying OS packages, AppStream has the application related packages, developer tools, databases, and others.

In other words, the BaseOS repository has the traditional RPM packages that make up the core of the OS. Once you update the system, it will automatically download and install any new versions of these packages.

However, sometimes you may not want to bulk-upgrade software as it can cause compatibility issues in environments you want to keep stable (when testing code, for example). That is why the new CentOS 8 comes with the additional AppStream repository, providing more features, functionality, customization.

This repository has a different way of managing software, classifying it into several subcategories:

CentOS 8 comes with the YUM package manager version v4.0.4, which now uses DNF (Dandified YUM) technology as its backend. DNF is the next generation of YUM and the new OS version lets you use both for managing packages.

The CentOS team has improved security features to ensure data protection and prevent breaches. The latest release will now have OpenSSL 1.1.1 which by default includes TLS 1.3. This ensures that all your data, as well as your clients’ data, will be cryptographically protected.

Also, the OS comes with a system-wide cryptographic policy which means you will not have to modify security configurations for individual applications.

CentOS Stream is a project combining the Fedora Project and RHEL. The CentOS team created the Stream version as a rolling-release distro in an attempt to eliminate delays and compatibility problems after significant updates.

The basic ideas behind this project are to:

The release of CentOS 8 includes many new features that has raised the bar for future RHEL-based operating systems and should improve overall UX.

This article has outlined the most significant changes and updates included in CentOS 8.

Sofija Simic
Sofija Simic is an aspiring Technical Writer at phoenixNAP. Alongside her educational background in teaching and writing, she has had a lifelong passion for information technology. She is committed to unscrambling confusing IT concepts and streamlining intricate software installations.
Next you should read
SysAdmin Web Servers
How to Install CentOS 8 {with Screenshots}
Since there is no way to upgrade from CentOS 7 to CentOS 8, users need to go through the entire installation...
Read more
SysAdmin Web Servers
How to Install CentOS 7
CentOS 7 is an open-source Linux distribution based on Red Hat Enterprise Linux (RHEL).CentOS is seen by many...
Read more
SysAdmin Web Servers
How to Check CentOS Version?
There are many reasons why you should know the CentOS version you are running. For example, if you are...
Read more
SysAdmin
Linux Kernel 5.0 Released, New Features & Improvements!
The long-awaited Linux Kernel 5.0 upgrade is finally out, and it is time to take a look at all the new...
Read more
© 2021 Copyright phoenixNAP | Global IT Services. All Rights Reserved.