How to Use Comments in Python

Home » DevOps and Development » How to Use Comments in Python

One key skill in writing code is the ability to use comments. Comments are usually used to leave notes about the function of the code. However, they can also be used to disable parts of the code.

This guide will show you how to use comments in Python effectively. 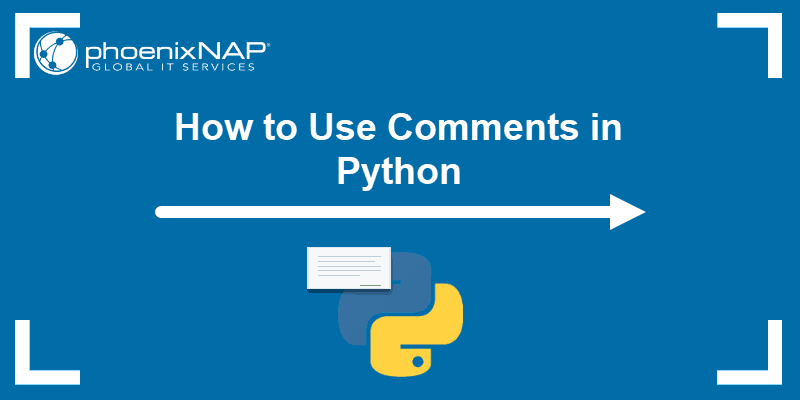 To mark a line as a comment, start the line with a hash sign and a space:

Using the hash sign to start the line tells the system to ignore everything on that line. You can still see it when you edit the file. When the application runs, it pretends like those lines don’t exist.

For example, in the Hello World program below:

You can set any line as a comment, and use as many as you’d like. If your code has different blocks, you can use a comment to explain each one:

To mark a series of lines as a comment, add a hash sign to the beginning of each line:

Some text or code editors for programming (like Notepad++ or Atom) will allow you to highlight the text, then mouse-click to mark the block as a comment. These tools can save you time commenting out each line.

In general, you should use the hash sign for each line to mark it as a comment. This is the recommended and approved method. However, you may need a quick way to comment out a whole section. Use a triple-quote mark to achieve a similar function as a comment:

Note: It is important that you correctly indent the triple-quote mark. If you don’t, you will see a syntax error.

This method doesn’t create a true comment. Instead, it creates a text constant with no function. As long as you don’t add anything that accesses that string of text, it will work the same as a regular comment.

The triple-quotation mark can be tricky, because in some circumstances it creates a docstring. If you use a triple-quote following:

…Python will read it as a dosctring. Docstrings let you put human-readable text into the project. This is usually used to create documentation that’s part of the application and can be accessed at runtime.

This is where you comment on the same line as a piece of code. The best time to use this is when you’re explaining a complicated operation. Use an inline comment to point out the exact spot you want to clarify.

Inline comments can be used to add context for people who are reading the code. For example, you might explain the purpose of a variable, or leave a note about the type of variable created. It can also be helpful to explain why a particular command is used, as in the example above.

Commenting Out Code for Testing

Because comments render text invisible to the parser, you can use them to disable commands. This lets you test segments of your code with and without new additions.
For example, look at this simple dice rolling program:

The section that’s commented out is unused. Remove the hash sign to enable the code to test it.

You should now understand how (and why) to make comments in the Python language.